Quality architecture means your systems model your business. When they don’t the affects are real. At best they are minor frictions harming the efficiency and effectiveness of your business. At worst they cause people genuine suffering and harm. When this happens your business is suffering from Digital Untethering.

How could a simple architectural design cause a person daily stress and thousands of pounds? For Omar Khalid this was the reality after an integration continuously overwrote an incorrect credit score putting him in financial difficulties.

How can a few lines of computer code harm a countries ability to test-trace and isolate during a pandemic? For many people like Laura McCormack a poor assumption in a simple identity check meant she couldn’t get a COVID test.

These are the real world impacts of Digital Untethering. But what is the cause?

Social reality is a term used to describe the way communities of humans create realities which have no grounding in physical reality. Money is a great example. It is a completely made up concept. There is absolutely no basis for money in the laws of chemistry, biology or physics. This doesn’t stop large groups of people treating it as real and influencing their behaviour based on the ‘reality’ of money. Even to the point of killing each other or accepting the suffering of huge amounts of fellow humans due to ‘poverty’.

Organisations create their own form of social reality. This reality is shared between its customers and the people who work to maintain this reality by providing goods and services. Together we make products up, agree on them as a group, behave accordingly (often by exchanging money for them), and then they become real.

Social reality is generally constrained by physical reality. We tend to spot when the two don’t match. Like when a child tells you they have superpowers and can leap over buildings and walk through walls. We know that this is purely imagination. We know that gravity prevents humans from jumping higher than buildings. We know walls are solid matter.

Generally physical reality keeps social reality in check. When this no longer happens it is called Untethering. And that’s not good. It can cause people to do crazy things like drink disinfectant because their President says its a cure for COVID-19.

What happens when the social reality of our organisation doesn’t match the digital reality we’ve created? What happens when we turn the fluid ideas in our collective imaginations into physical execution? Go ask people like Omar Khalid or Laura McCormack. Or ask the children who’s university prospects were destroyed by an algorithm or the millions of black people and other minority groups who experience daily prejudice thanks to biases in digital decision making. 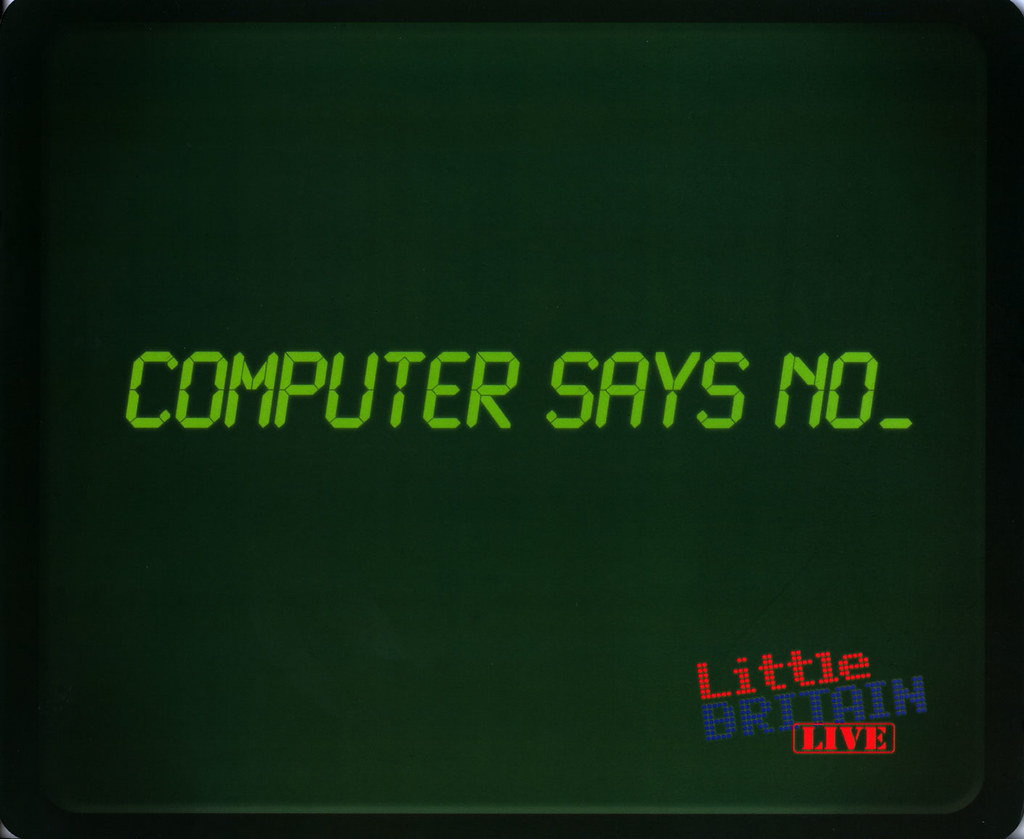 These are extreme cases of Digital Untethering. Yet there are more subtle cases we all experience daily and will be present in almost every organisation. Little Britain immortalised many of these with their character Carol Beer and her catchphrase “Computer says no”. They found no shortage of ways to parody how customers are driven to exasperation because social reality and digital reality failed to match.

Most organisations will be suffering from large amounts of Digital Untethering. The impact of this is felt directly by their customers and their employees who struggle to correct the errors produced by this untethering. In extremes, like for Virgin Money, it can lead to repetitional damage. Mostly it will simply upset your customers. Some of them might demand compensation or refunds. Some of them might be driven away completely.

The first steps for executives is to realise that what they are suffering from is Digital Untethering. They then need to take responsibility for it. They need the tools to spot it and know what actions to take to fix it.

How do you spot Digital Untethering? An organisation’s social reality is created in exactly the same way any other social reality is. Through the language we use and the stories we tell. It is formed between your customers and the members of your organisation (your employees).

When we digitise this reality we need to honour that language and those stories. They are rich, not just with descriptions of how things should get done (business processes) but also your culture and what differentiates you. A great example of how this social reality works is the comic Burger King advert “Whopper Go on, Say it” The ad sets the scene when a customer orders a cheeseburger and the entire restaurant stops and falls silent. The next shot is a member of staff escorting them outside and pointing to the large “Home of the Whopper” sign and telling them “Don’t come back”. The ad creates a parody of a social reality by playing on the cultural significance the term Whopper has between Burger King and its customers.

This powerful observation is captured in Domain Driven Design and the idea of the Ubiquitous Language.This language, developed between developers and users, forms the basis of the model used in software. It permeates everything, becoming the language of your APIs, your object models, your database fields and even your tests.

Techniques from Domain Driven Design such as Domain Modelling and Event Storming enable you to achieve this. They work by enabling users, business people and developers to explore and clarify your social reality. The result is to co-create the basis of your digital reality. Even though social reality leads sometimes the constrains of our digital reality have to influence our social one. This often happens when we discover concepts which “could be smoothed over in conversation but not in the precise world of computers” - [Martin Fowler].

There are simple tests for any exec to see if their organisation has become digitally untethered. Take the nouns and verbs from your APIs and code and tests and put them infant of one of your customers or users. Do they understand them? If you think this is a stretch then try for yourself. Go look at the Spotify API reference. Does it make sense to you? Do the concepts of Albums, Artists, Playlists match your reality as a music listener?

Would you feel confident that your customers would understand your own digital interfaces as easily as you just understood Spotify’s? If the answer is No then you have become Digitally Untethered.